The level of community interest in this proposed project has been minimal and the WVCO Board has agreed to not take a position at this time.

The application for approval to change the existing zoning on this property to allow for the development of a Planned Area Development has advanced to the Yavapai County Board of Supervisors. A Public Hearing and action on the request will be conducted at their December 2, 2020 meeting which will be held on-line. The County Planning & Zoning case list provides a link to the hearing.

The Yavapai County Planning and Zoning (P&Z) Commission voted on November 5, 2020 to support the applicant requested Zoning Change and forwarded it to the Board of Supervisors (BoS) with their recommendation for approval.  The developer originally proposed in September that the development consisting of 340 residential units which is currently in the County be annexed to the City of Prescott. The planned development involved the purchase of a segment of the State Trust Land required for access and a unique water and sewer service agreement with the City of Prescott.  When the State Trust Land Trustee made a presentation indicating the State did not believe it would be in their best interest to split up their parcel, and it was not clear how the City could justify under current policy the action they would be required to take, the applicant’s proposal was then revised to consist of a County Zone Change proposal.  The other issues did not seem to have been addressed.

Although the position of the State and the significant issue of providing water and sewer service was discussed at the P&Z Commission Hearing, the Commissioners and County representative generally dismissed these issues as inappropriate for consideration at this time.  The stated direction was that the Zoning Change should be approved with a series of stipulations regarding the availability of access and services, with the actual consideration of these issues not taking place until the developer applied for a development permit.

The level of local area interest in this development is not clear since the local property owner involvement in the P&Z Commission Hearing was minimal..One resident appeared in person expressing concerns about the failure to properly consider flood control issues, and one resident attended virtually indicating that he considered P&Z Commission action on this application pre-mature because the access and services issues had not been addressed.  The Commission recognized that there were eight written submittals objecting to the application but none of them were addressed during the meeting. It was not possible to identify the number of individuals who chose not to participate and only watched the Hearing on the Internet.

Interested and concerned individuals are encouraged to participate in the BoS meeting and to let the WVCO Board know of their interest by sending an email.

The County has announced that effort on updating the County Community Plan to meet the required 2022 revision requirement has started.  The Board of Supervisors has rescinded the action taken over 10 years ago to stop accepting formal planning documentation from individual communities and is now asking for involvement at the local level.  The first step will be for each interested community to participate in developing a Community Vision Statement with the assistance of the Development Services department.

Williamson Valley has been invited to participate in this project and the WVCO is planning on serving as an information clearing house for guidance and direction provided by the County.  It is anticipated that WVCO will provide coordination assistance to Valley residents and businesses Interested in participating.

Development Services has scheduled a series of Webex-based on-line presentations and meetings.  WVCO will announce these meetings to those who are interested and willing to assist in this project.  It could be one of the most important efforts residents and land owners can be involved in to determine the future direction of the Valley.

A Work Group is being organized to help make sure everyone interested is kept informed and given a chance to participate.  WVCO will be supporting an email Reflector to allow public discussion and will be holding Zoom-based meetings in support of this effort.  There will also be a special section of the Williamson Valley Website dedicated to the planning project.

Everyone interested in participating is requested to send an email to Planning@WilliamsonValley.org providing your contact information. It will be important that you attend the County Webex presentations starting in early December.

Please contact your neighbors and make sure they are aware of this effort.  Encourage them to get involved.  Membership in WVCO is not a requirement 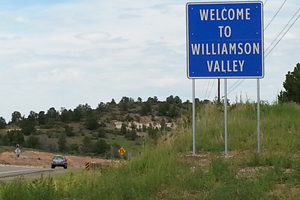