This page is devoted to information about transportation projects that affect the Williamson Valley community.

In support of the Williamson Valley Road Safety Improvements – Phase 3 project which will start later in 2021, the Yavapai County Public Works Department completed a project in February 2021 to expand the road box culvert on Williamson Valley Road just south of Kelly Drive.  The work was accomplished with minimal traffic impacts.

For information on the next phase of this project, please contact Yavapai County Public Works at 928-771-3183 or visit them on the web at https://www.yavapai.us/publicworks. Details will be posted here as available.

Phase 2 of the Williamson Valley Road Safety Improvements project has been completed. The road has been widened as it enters into the Valley from the South and turn lanes were added at the intersections with:  Pemberton Drive, Cliff Rose Road, Ridge Road, Buena Vista Trail, and Longview Drive.  Widening of the shoulders now accommodates a center turn lane with increased turn lane lengths.  Significant drainage improvements were included in the project. We thank all Williamson Valley residents for their cooperation and consideration while our road was being improved.

For information on the next phase of this project, please contact Yavapai County Public Works at 928-771-3183 or visit them on the web at https://www.yavapai.us/publicworks. Details will be posted here as available.

Yavapai County began an incremental program of road improvements in 2018 consisting mainly of small widening projects at intersections identified during the traffic accident and safety review as documented in the Traffic Study. Their prioritization of the alternatives listed in the study has apparently been adjusted based upon project expense and a needs evaluation conducted by the County. In 2019 the second item in CYMPO’s list was completed when the road segment between Buena Vista Trail and W Cliff Rose Road was widened to provide left turn pockets. The County also made significant improvements in the storm water drainage system in the area.

The next phase of improvements to Williamson Valley Road are expected to include widened intersections with left turn pockets at W Kelly Drive and W Oneal Road. The schedule for this possible 2020 project will be announced as soon as it is published.

Yavapai County Public Works evaluated several possible routes for a northern connecting road between the Williamson Valley area and the Town of Chino Valley. The recommended route runs from the intersection of Inscription Canyon Road and Williamson Valley road to the northeast for approximately one half mile and then continues due east on the Center Street alignment to the intersection of Center Street and Highway 89 in Chino Valley. The estimated cost including right of way acquisition, design, permitting and construction is $13.3 million.

The Corridor report was accepted by the Yavapai County Board of Supervisors on August 5, 2013. The Corridor study was presented to the Central Yavapai Metropolitan Planning Organization (CYMPO) on September 18, 2013. This recommended Northern Connector has been included in CYMPO’s Long Range Regional Transportation Plan Update, although construction is many years off.

CYMPO hosted a public meeting at the Prescott City Council chambers on September 29 (2013?); the first session began at 1:00 P.M. and was to be repeated by a second session at 5:30 P.M.  The purpose of the meeting was to introduce to, and to take comments from, the general public to the proposed updates to the formally-adopted CYMPO 2030 Plan.  There were several charts and graphs presented to show the various growth projections and roadway proposals under different sets of circumstances.  While the graphics were similar in form to that found in previous reports and presentations, the data was substantially different and now reflects a more realistic assessment of projected growth.  These charts will be available on the CYMPO website (www.cympo.org) for public view and comment but were not yet available for inclusion here. 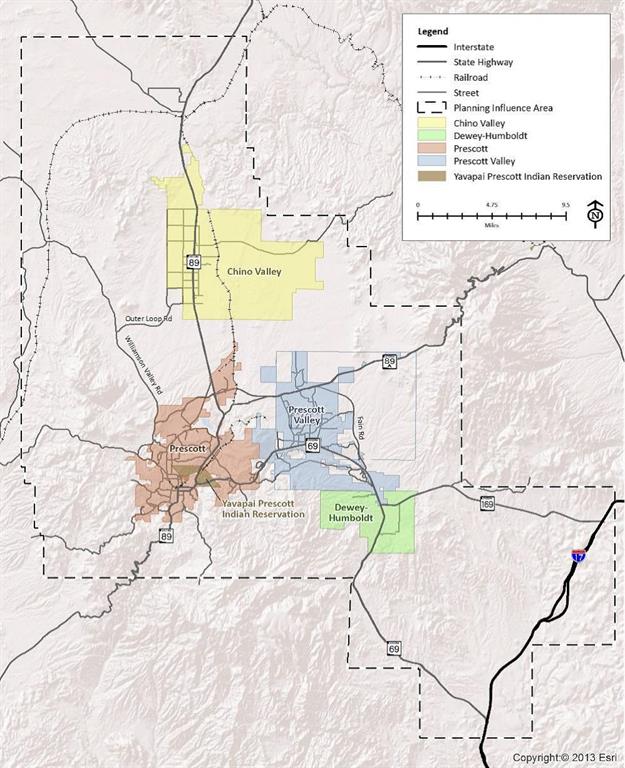 A brief summary will give the reader some idea of the magnitude of the reductions in growth projections.  The information below comes from the 2030 Plan (prepared in 2005), the 2011 Regional Transportation Plan Update, and the current Plan Update.  The 2011 Update used actual census numbers from 2000 and 2010; the Plan Update extends the timeline to 2040, with population projections further adjusted to reflect current expectations.  Data for Dewey-Humboldt is not included in the table below nor is data for the portion of Yavapai County outside the planning area.  2040 data supplied by CYMPO. 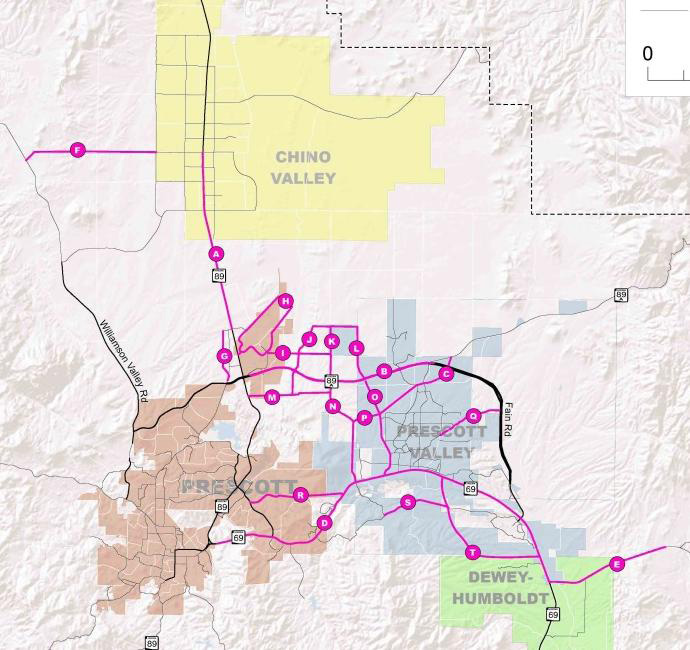 Before closing, a word or two about water needs to be added.  Despite a dramatic reduction in population projections, the growth is still expected to approximately double by 2040, thereby placing additional strain on limited water availability.  It is the responsibility of the plan participants to determine the adequacy of water (or the lack thereof) when arriving at population growth projections to be used in Plan Updates.  Citizens with concerns in this area can find additional information on this website and should address any additional questions to their local supervisor or city councilman.

It is well to remember that while CYMPO coordinates the development of these transportation plans and recommendations, it is not responsible for the funding; that is a matter for the state and/or locality to determine; federal funds can be used if available.  Once the Plan Update has been completed and approved, it will be up to the plan participants to make decisions about which proposal gets built and when.  Given the current condition of the various treasuries and the ongoing expense of maintaining existing infrastructure, it is apparent that the money necessary to complete all of the proposals is simply not even close to being available, thus difficult funding decisions lie ahead.  As more information is disseminated, WVCO will continue to keep you informed.  We would recommend the CYMPO website (www.cympo.org) for additional information and for submission of your comments.  The Regional Transportation Plan is scheduled to be updated again in 5 years.

The Arizona Department of Transportation (ADOT’s) has published its latest proposed Tentative 5-year Plan. The document contains 178 pages of information on Highways, Regional Transportation Plans, and Airport Improvements. It is currently in the Public Comment Period which will end in May of this year. My review shows there is little of interest to Williamson Valley Community Area (WVCO) in this Plan. Projects in Yavapai County as a whole deal with highways 89 and 89A. Proposals originating from the Central Yavapai Metropolitan Planning Organization (CYMPO) do not come near Williamson Valley.

There are many improvements, expansions, and modernizations scheduled for the airport (Love Field), but whether these would impact this area can’t be determined from the report. The only impact observable from enlarging the airport would be increased automobile traffic to and from the facility. For now it is reasonable to assume such traffic is too far from the Williamson Valley community to have any impact on Williamson Valley Road or other roads in the area.

As to Williamson Valley Road itself, it seems clear that the widening that has already taken place from Pioneer Parkway to Iron Springs Road is significantly more than adequate to accommodate any near and mid-term needs. Growth projections in the CYMPO update of the 2030 Plan (currently underway) are dramatically scaled back from the earlier study and tend to coincide with the Department of Economic Security’s estimates of population growth. Further, it appears that the local political subdivisions have recognized that the impact of limited water availability will play an important role in limiting future growth. Given the County’s tight budget restrictions and lack of excess funds, together with a responsible population growth projection, it is reasonable to conclude that there is no need or available funds to undertake any significant widening of Williamson Valley Road now or for quite a few years to come.

In summary, budget restraints and demonstrated needs appear to have the most significant impact on ADOT and local expenditures at this time. The good news for residents of the Williamson Valley community is that there is simply no justification for widening Williamson Valley Road to any significant degree at this time or in the near future. WVCO will continue to monitor the situation and report back to the membership as situations arise.